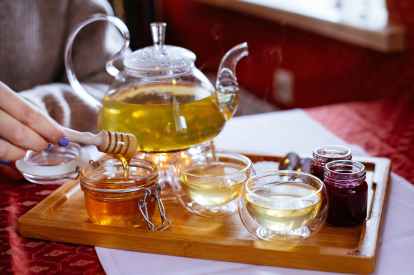 Can you lose weight with honey?, not surprisingly for the world of weight loss and diets, the answer is maybe. Honey is a wonderful food. Honey has several health benefits, such as its antimicrobial properties and antioxidants, which protect your cells from damage. There is evidence that suggests honey can help with weight loss by using it as a sugar substitute. Honey is high in calories though, so you should eat it in moderation.

A 2010 study published in the Journal of the American College of Nutrition compared the effects of honey and sugar in healthy women, and found that honey had a lesser effect on blood sugar.  Because rapid swings in your blood sugar levels can set off hunger, whether you need food or not, blood sugar fluctuations are important for appetite control.

It is believed that if you drink warm water with honey first thing in the morning, it helps to increase body metabolism. If you eat honey before bed, the body begins to burn more fat during the early hours of sleep, and replacing sugar with honey helps to regulate the brain signal that urges you to eat more sweet sugary foods.

Honey should never be mixed with boiling water because this destroys the nutrients in the honey. Water just warm enough to melt the honey and fuse it into the liquid should be used.

Honey has more calories than sugar but it also has useful nutrients and other effects and benefits. Replacing sugar with honey is a good idea but it should still be consumed in moderate amounts. Honey tastes good to most people, so it wouldn’t be a major effort to use it in place of sugar.

This site uses Akismet to reduce spam. Learn how your comment data is processed.